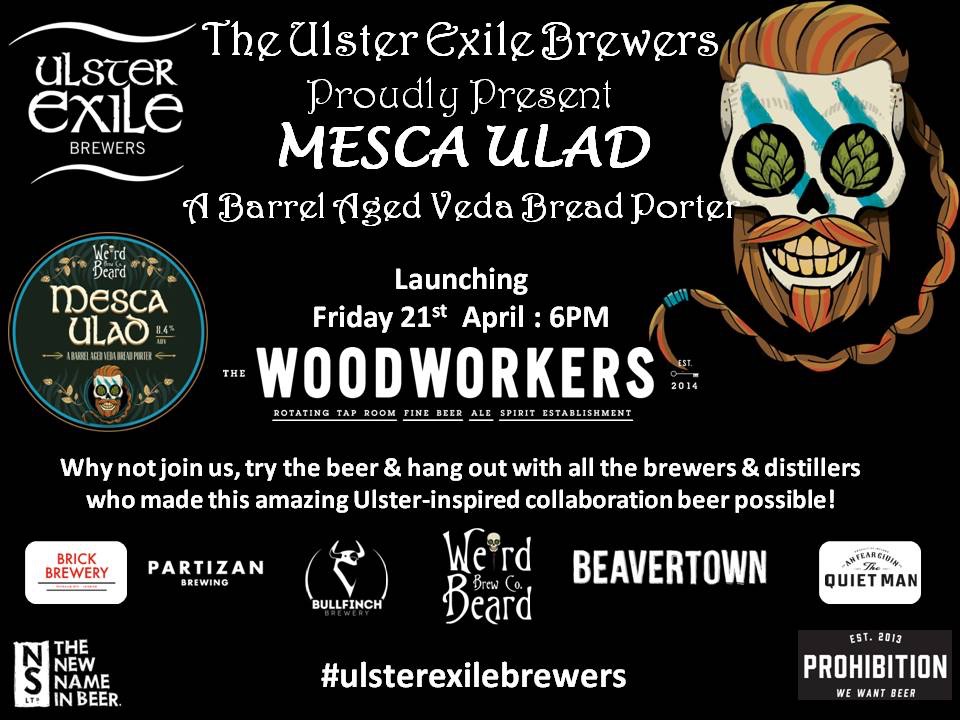 Gregg Irwin from Weird Beard Brewery had the idea ages ago. The idea was to join the dots of Ulster-born brewers now living and brewing in London, and come up with a picture that somehow portrayed a collaborative Ulster-themed beer. The Ulster Exiles Project was born. Then came the idea for a brew inspired by Veda Bread, a soft malted bread we all grew up with back home. Soon, a recipe for an imperial porter was formulated, and Gregg suggested we age the fermented results in whiskey barrels. And why not, indeed.
One Saturday last year we all got together to make it happen. Gregg and Chris from Weird Beard, Jonathan Hamilton from Beavertown, Chris Heaney from Partizan, Ryan McLean from Bullfinch, and myself rocked up to Hanwell, armed with bags full of Veda which our mums sent over (thanks, ma!). We broke bread together – literally – and mashed in. A Veda bread sandwich lunch followed. Once the mash was complete, copious amounts of the Veda was laid on top of the grain, for the sparging stage. The end of brew day consisted of a very speedy clean down…perhaps because there were several brewers around who could get the job done quick…perhaps because there were several brewers who were eager for a beer.
Gregg managed to source whiskey barrels bound for Quiet Man Distillery in Derry, then the Weird Beard guys racked the fermented porter into said barrels, soaking up all the goodness. Next thing we knew, a case of bottles arrived at Brick, Beavertown, Partizan and Bullfinch, courtesy of Gregg. Mesca Ulad had finally arrived. Launching 21st April at The Woodworkers
Written by Russell Lee, Assistant Brewer
#ulsterexilebrewers